This post notes on, a somewhat abstract, construction of inverse limits (on groups). These are certain well-behaved subsets of similarly-well-behaved families of algebraic objects (like groups). Many fiddly structures can be easily constructed as inverse limits, and many nice properties of the building blocks used for the inverse system, continue to hold for the limit object. We focus on groups for simplicity, but this works for many other structures (compact groups, topological spaces, what-have-you). There is a powerful application to algebraic topology: the construction of Cech homology. It's one of the first generalizations of simplicial homology; it strays a bit from Eilenberg-Steenrod axioms (exactness breaks), but it has stronger properties of continuity w.r.t. inverse systems, which make it useful in e.g. fancy game theory.

We can prove this set is non-empty and also forms a group. Informally, an element of the inverse limit is a sequence of "valid choices" of elements of $X_i$.

For example, consider finite sets $X_i$ indexed by $i\in\N$ such that $|X_i|=2^{i-1}$. Let $\pi^{j\to i}$ be such that it maps two unique elements from $X_j$ to one unique element in $X_i$. This forms an inverse system. If we interpret it as an infinite complete binary tree, its limit is the set of all infinite paths starting at the singleton $X_1$. In the picture below, the path, or the "thread" of choices, is valid because it does not "jump" to "illegal" subsets. In fact, with the subspace topology, this construction results in the Cantor set! 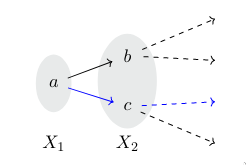 Now, we would like to relate the limits of systems related by an inverse map.